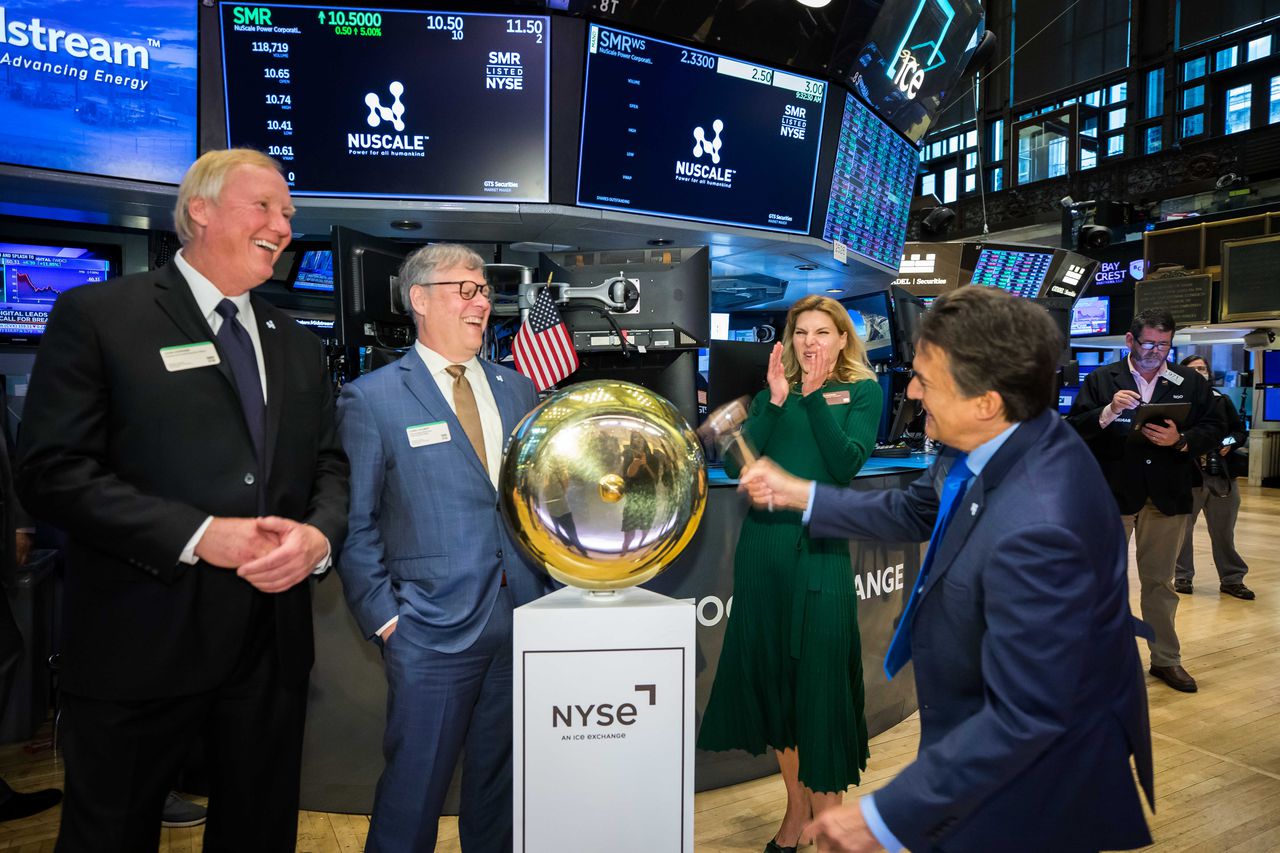 Shares in Oregon nuclear energy company NuScale Power began trading Tuesday on the New York Stock Exchange, part of a deal with an investment fund that raised $380 million for its modular reactor technology.

NuScale, founded in 2007 with technology developed at Oregon State University, says its reactor design is safer to operate and less expensive than conventional nuclear reactors. Now headquartered in Portland, the company hopes to capitalize on renewed enthusiasm for nuclear energy as a carbon-free alternative to coal and natural gas.

While NuScale has talked with several utilities and foreign governments about its reactors, though, it’s years away from deploying one. The company still needs key approvals from federal regulators, and to demonstrate that its technology delivers on its promise.

NuScale had been owned by a Texas energy company, Fluor Corp., which paid $30 million for a majority stake in 2011. Fluor has spent $600 million developing NuScale’s technology in the intervening years and retains 60% ownership after Tuesday’s deal.

The company said it has an enterprise value $1.9 billion, including the value of its debt. Shares were up 8 cents Tuesday morning, at $10.08. NuScale is trading under the ticker symbol SMR, a nod to its small modular reactor design.

NuScale went public on Wall Street by merging with an investment fund known as a special purpose acquisition company, commonly known as a SPAC. SPACs became popular in the past few years because they avoid some of the regulatory process and disclosure requirements normally associated with public offerings.

Recently, though, SPACs have lost their luster as investor returns have sagged. Many SPACs back newly formed businesses with vague prospects.

NuScale Chief Financial Officer Chris Colbert said NuScale’s technology and business are better developed than some of the disappointing SPAC deals, having already spent $1.4 billion on its innovations.

“The proof will be in the pudding,” Colbert said from New York, where he and other NuScale executives were celebrating their stock’s debut. “We think we bring a real value proposition to people. We’ve invested heavily up until now.”

NuScale said it will use its new funding to improve its technology and prepare to deploy it. Colbert said the company is talking with dozens of potential customers who are eager for an affordable alternative to coal and other carbon-producing power sources.

“It gives us more flexibility to respond to more opportunities that come our way,” Colbert said.

NuScale employs about 540, including two-dozen at its Portland headquarters and 450 in Corvallis. It hopes to have its first reactor operating in 2029 and is working with the Idaho National Laboratory and the Utah Associated Municipal Power Systems.

The new reactor design is smaller than prior generations of nuclear power plants, which NuScale says make them cheaper to construct. Components can be manufactured simultaneously with site development, speeding deployment.

NuScale says its design is safer, too, because it can shut down and cool itself in case of a disaster. If the technology works as intended, NuScale’s design would prevent the kinds of catastrophes that took place at Chernobyl and Fukushima.

Like all nuclear reactors, though, NuScale’s plants would produce radioactive waste that would be hazardous for generations.

And last week, Reuters reported that federal regulators are scrutinizing how well NuScale’s design would hold up in a severe earthquake. The Nuclear Regulatory Commission said its initial design approval remains in place while it seeks additional documentation from regulatory staff.

NuScale estimates that that it costs about $3.3 billion to fully build out one of its reactors with 12 modules. It says that cheap enough that a steel mill or other industrial customer could develop its own power supply, possibly splitting costs with a local utility.

NuScale CEO John Hopkins said utilities are talking about using its modular reactors to complement wind and solar power, increasing or decreasing their nuclear energy as needed to keep electricity available at a consistently affordable price without boosting carbon emissions.

“We see ourselves as complementing renewables,” Hopkins said.

Next post Bank warns over state of South Africa’s economy