The Bank of Russia acted quickly to shield the nation’s $1.5 trillion economy from sweeping sanctions that hit key banks, pushed the ruble to a record low and left President Vladimir Putin unable to access much of his war chest of more than $640 billion.

The central bank more than doubled its key interest rate to 20%, the highest in almost two decades, and imposed some controls on the flow of capital. It was part of a barrage of announcements that eventually restored some calm after a rout that pushed some Russian Eurobonds into distressed territory last week.

“The Bank of Russia will be very flexible in using all necessary instruments,” Governor Elvira Nabiullina said in brief televised remarks in Moscow.

Facing the risk of a bank run, a rapid sell-off in assets and the steepest depreciation in the ruble since 1998, policy makers banned brokers from selling securities held by foreigners starting Monday on the Moscow Exchange. Exporters were ordered to start mandatory hard-currency revenue sales and stock trading was temporarily suspended in Moscow.

“The ruble has ceased to be a freely convertible currency with the sweeping sanctions,” said Friedrich Heinemann, head of the corporate taxation and public finance department at German think thank ZEW. “In terms of currency policy, this throws Russia back to the early 1990s and the time before the country’s comprehensive economic opening.”

Less than a week after Putin ordered his military to invade Ukraine, Russia is at risk of succumbing to the biggest financial crisis of his more than two decades in power. He gathered Nabiullina and other top officials in the Kremlin to discuss plans for a response, calling the U.S. and its allies who joined in the sanctions “the empire of lies.”

The steps taken so far on Monday represent the most forceful measures by Russia after the latest round of sanctions, with the U.S. and the European Union agreeing to block access to much of the $640 billion the country’s central bank has built up as a buffer to protect the economy.

But the U.S. and Europe remain reluctant for now to sanction Russian energy, seeking to insulate the world economy from a greater shock. Germany’s Economy Ministry said on Monday that purchases of Russian gas remain possible using SWIFT even after the latest curbs.

In the absence of even wider trade sanctions that could ensnare Russian energy shipments, the policies implemented so far may be enough to stabilize markets, according to Renaissance Capital. The ruble recouped some losses and was trading nearly 14% weaker at around 96 per dollar as of 4:26 p.m. in Moscow. It was briefly down more than 30% earlier in the day.

“All these measures should limit the depreciation of the ruble,” said Sofya Donets, economist at Renaissance Capital in Moscow. “If the run on FX continues, we would anticipate additional direct restrictions on domestic operations.”

Nabiullina, who took no questions from reporters on Monday, said the central bank didn’t intervene in the currency market on Monday as a result of the limitations on its reserves. It spent $1 billion last Thursday and a smaller amount the following day to shore up the ruble, she said.

“We will make further decisions on monetary policy based on how the actual situation develops while assessing risks primarily in terms of the external conditions,” Nabiullina said.

Decisions to suspend some regulatory requirements amounted to a capital boost for banks by the equivalent of 900 billion rubles ($8.6 billion), she said.

The ruble’s 24% drop so far this year is the worst slump globally, prices compiled by Bloomberg show. At current levels the ruble’s slump is the biggest since 1998, the year the nation’s economy went into a tailspin and the government defaulted on its local debt.

S&P Global Ratings lowered Russia’s credit score below investment grade on Friday, while Moody’s Investors Service — which rates Russia one notch above junk — put the nation on review for a downgrade.

Policy makers are counting that the steep rate hike, alongside the mandatory conversion of export revenues and a halt to outflows from the financial market, will help restore confidence and minimize losses at home even as war continues to rage across the border.

“This is merely a reaction by the central bank to the fact that sanctions have weakened, completely neutralized their defense arsenal that they’ve built up in the past five to 10 years,” said Simon Harvey, head of FX analysis at Monex Europe Ltd. “It’s unprecedented escalation and markets are very poorly positioned for it.”

Russians were already lining up at cash machines around the country as demand for foreign currency soared. The central bank has said it was increasing supplies to ATMs to meet need and issued another statement Sunday vowing to provide banks “uninterrupted” supplies of rubles. 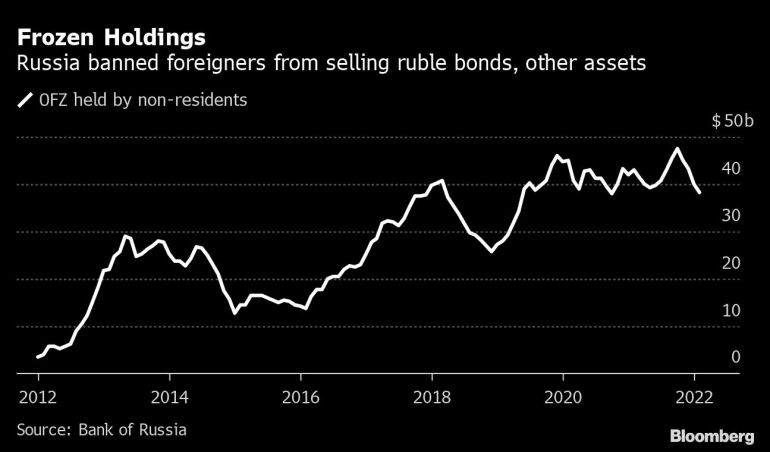 Most of Europe has closed its airspace to Russian carriers, which could make it difficult to physically transport cash into the country.

“I think rubles will be plenty, the question is FX,” said Viktor Szabo, an investor at Aberdeen Asset Management Plc. in London. “With reserves partially blocked, the central bank will have to prioritize, and I guess population will not be on top of the list.”

Oil and gas revenue remains a lifeline as the sale and transport of energy have largely escaped disruptions. At current prices, Russia was running a monthly current-account surplus of about $20 billion. 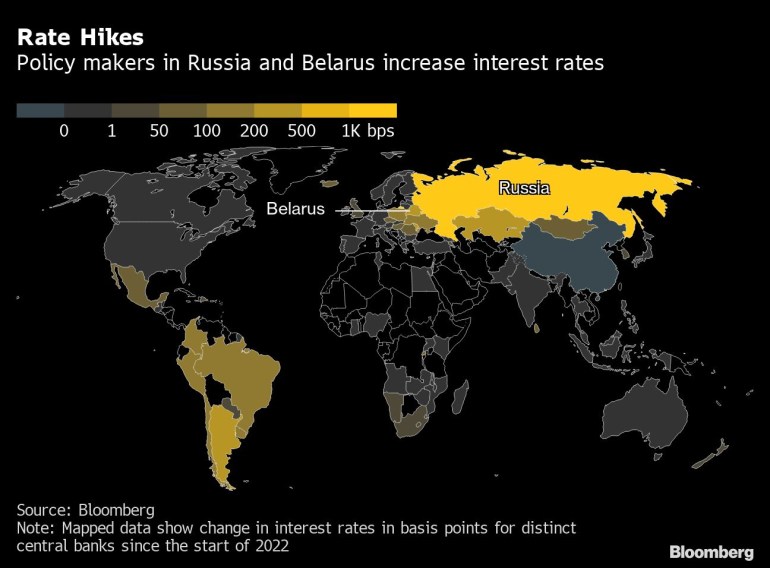 Still, damage to the economy will be severe from the combination of wild swings in the exchange rate and the soaring cost of money. Bloomberg Economics was already predicting a contraction in the first and second quarter even before the weekend’s sanctions and now sees the risk of an even “deeper downturn.”

Renaissance Capital said it now expects a recession this year, compared to a forecast of 3% growth expected as recently as last week.

The continued flow of oil will likely provide some relief, given the World Bank calculates commodities account for almost 70% of goods exports. About 43% of the country’s crude and condensate output is sold abroad.

If crude prices stay around $90 this year, the country’s budget could get more than $65 billion in extra revenue, adding to the Kremlin’s financial strength, economists said recently. Oil at $100 would boost the windfall closer to $73 billion.

In Russia, memories linger of hyperinflation that peaked at more than 2,500 percent in 1992 and wiped out savings in the wake of the Soviet collapse. Price growth is already running at more than double the central bank’s target, despite a series of rate hikes since last March.

Renaissance Capital estimates the suspension of operations with non-residents alone could prevent $50 billion in possible capital outflows in the coming weeks. The freeze on such transactions may stay in place for long, according to RenCap’s Donets.

“These measures may help calm down the increased market nervousness, but at the same time they undermine the foundation of monetary policy, which is focused on inflation targeting and a flexible exchange rate,” said Natalia Lavrova, chief economist at BCS Financial Group in Moscow. “We do not rule out a possible rate hike going forward or further unexpected and non-market decisions.” 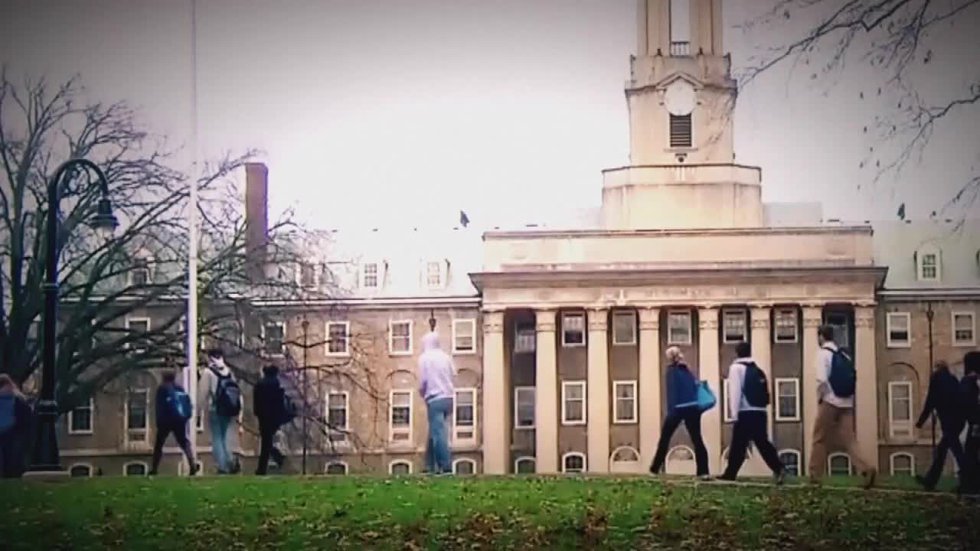 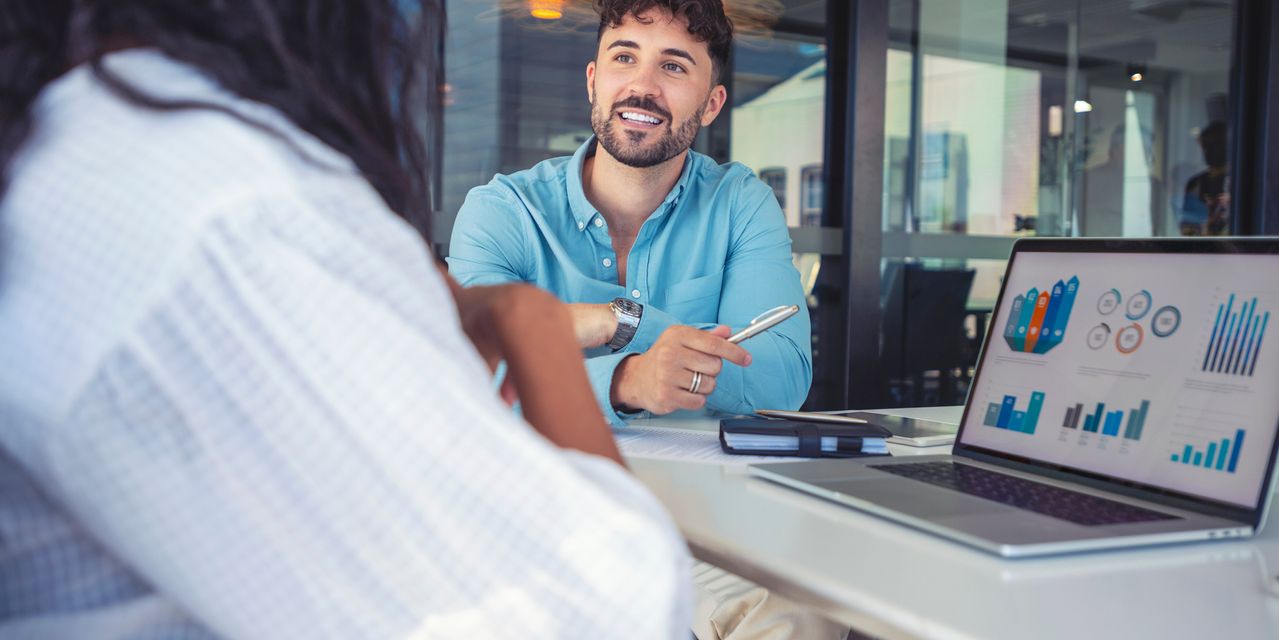 Next post ‘They all promise to help’ but no financial adviser seems to offer what I need. I have two 401ks, Roth accounts and real estate, and want a one-time plan for managing my money myself. Can you help?