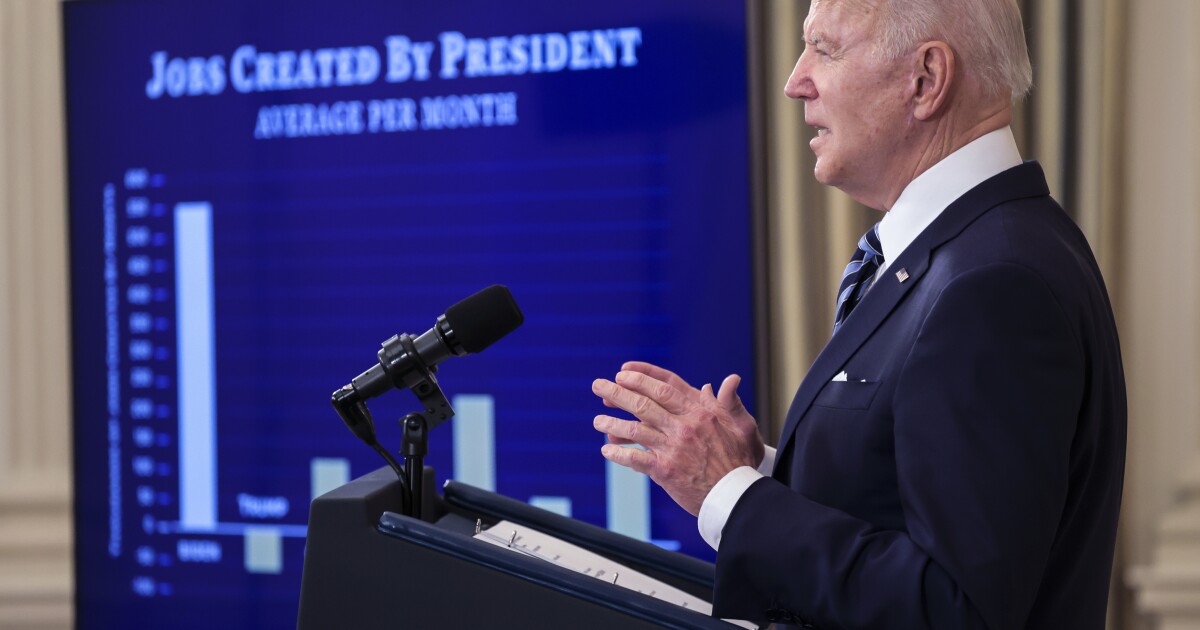 But polls show Americans remain deeply cynical about how the president is handling the economy — and that’s a problem for Biden and Democratic lawmakers heading into November’s midterm elections.

The president and his advisers routinely tout statistics that show how the economy is surging by most traditional economic metrics, seemingly mystified about why the American public isn’t giving Democrats more credit for this boom.

Last week, as the president delivered remarks on the January jobs report, he highlighted that in his first year in office, the economy created 6.6 million jobs.

“If you can’t remember another year when so many people went to work in this country, there’s a reason: It never happened,” Biden said, telling reporters to look at economic statistics dating back 40 years to President Ronald Reagan. “History has been made here,” he said.

But there’s piece of economic data reaching levels not seen in 40 years: inflation. And that’s an issue that Biden and his White House have struggled to address.

On Thursday, new data showed consumer prices are up 7.5% from where they were a year ago. Inflation is at its highest point since 1982 as the cost for food, electricity and shelter soar.

Shortly after the inflation data was released, Biden traveled to the Virginia district of Democratic Rep. Abigail Spanberger. She was first elected in 2018 in a former Republican stronghold by a narrow margin, and Republicans are working hard to flip the district in November.

Democrats like Spanberger in vulnerable districts have urged the White House to spend less time on its proposal for massive spending on the social safety net and more time on inflation and other economic issues.

While Biden briefly acknowledged that food and gas prices are up, he kept his focus on his plan, known as Build Back Better — arguing that it would lower costs for things like prescription drugs and childcare.

“You want to lower the cost of living for people — lower them in these areas,” Biden said about his plan.

The plan has passed the House of Representatives, but seems all but dead in the Senate, where Democratic Senator Joe Manchin has said he opposes new government spending, given inflation.

Inflation is surging, and that’s hitting voters where it hurts

Despite the many positive economic data points seen this year, economists and analysts say that people experience inflation on a visceral level — and that gives it outsized influence.

“Inflation is something people feel in a different way than they do other economic indicators,” said Jack Lew, who was Treasury secretary during the Obama administration. “The price of gas is reflected every time you get a tank of gas.”

Larry Summers, director of the National Economic Council under President Barack Obama, has been sounding the alarm on inflation for months.

Inflation makes people unhappy in ways that are disproportionate to the actual concerns that economists have about inflation, he said.

“People tend to think that … higher prices are something that’s being stolen from them,” Summers said.

In other words, people feel ripped off by inflation.

There’s not that much Biden can do about inflation

Inflation is complicated. Whether it goes up or down is largely in the hands of the Federal Reserve, which is responsible for interest rates.

Darrick Hamilton, an economist at the New School in New York, said context is key. “We just experienced the deepest decline on record. And likewise, the quickest recovery on record,” Hamilton explained.

“A lot of that had to do with an intervention from the government that allowed us to withstand that pandemic. So there’s going to be inflation.”

Some economists point to last year’s $1.9 trillion COVID-19 aid package known as the American Rescue Plan as one of the reasons behind the inflation seen today, but the alternative could have been more dangerous. They fear that without the COVID-19 relief money, the economy would have spiraled into a recession.

Hamilton argues that the inflation debate has been driven by “strategic political gaslighting” from Republicans that is “exploiting anxiety around things like inflation.” He agrees with the Biden administration’s assessment that the current spike in inflation is temporary.

American workers have been earning pay raises, but the Democrats’ inflation is more than outpacing them. Factoring in inflation, the average American worker has gotten a 2% real pay cut under Democrats’ policies.

It’s hard for Biden to take credit for the economy, given rising prices

Wages have risen for low-income workers, but many feel like the raises they’ve received have been wiped out by rising prices.

“There’s an old notion that you cannot tell people how they feel and that they feel better than they do,” said Lew, the former Treasury secretary.

The Biden team has to balance taking credit for accomplishments like the COVID-19 relief bill with the reality that COVID-19 and inflation are still very much on the minds of people every day, he said.

Lew recalled the Obama White House facing a similar messaging challenge during the recovery from the 2007-2009 Great Recession: how to tout the president’s accomplishments while acknowledging people still needed more help.

On top of inflation woes, many voters are frustrated and exhausted by the coronavirus pandemic and see the economy through that lens. Analysts and pollsters say voters remain anxious about economic instability resulting from some future new, unexpected coronavirus variant.

There is evidence that people’s views of the economy are often based on expectations of change, rather than the current reality, economists said. So after a fleeting summer of optimism, as the pandemic has dragged on, people have become more pessimistic about their economic future.

“Until the time when the pandemic is done, you know people are going to be upset about the economy,” said Austan Goolsbee, chair of the Council of Economic Advisers in the Obama administration.

“It doesn’t matter if you read in the paper that the unemployment rate is way down and we added more jobs than we’ve ever added in a year. It doesn’t, as long as we are in a worse spot than we wanted to be,” he said.

Biden has changed how he talks about inflation, but needs to repeat it more often, pollster says

Democratic pollster Celinda Lake says voters in polls and focus groups have been anxious about the economy for months.

“The instability is really unnerving the public,” she said. Voters are worried about economic volatility and the rising cost of living.

“It hits them every day, it hits them every purchase and it really makes them feel depressed about the economy,” Lake said. “They’re convinced that wages are not keeping up with the rising cost because you get a paycheck twice a month — you buy something that’s more expensive every day.”

Initially, the president and his team used the term “transitory” to insist that price increases were not a permanent thing.

But over time, Biden pivoted and began acknowledging more of the pain that people were feeling at the gas pump and the grocery store.

I also look forward to speaking with the President in Culpeper about the economic challenges and opportunities facing our Commonwealth in this moment of rebuilding and recovery.

Emory University political science professor Alan Abramowitz has looked at the results of every midterm election dating back to World War II and says a president’s approval rating is a far better predictor of what will transpire in the midterms than any economic indicator.

Since inflation seems to be dragging the president’s numbers down, analysts say Biden needs to make it clear he’s concerned about the problem — whether or not he has the ability to actually fix it.

“Bill Clinton once said when there’s a problem, people don’t necessarily expect you to solve it overnight, but they have to catch you trying,” said Bill Galston, former domestic policy adviser in the Clinton White House and now a senior fellow at the Brookings Institution.

“So, if I were Biden’s scheduler, I would have him out a couple of days a week dramatizing his commitment to the fight against inflation.”

Previous post What Happens If You Default on a Loan?

Next post The industry needs a consumer-focused advice framework