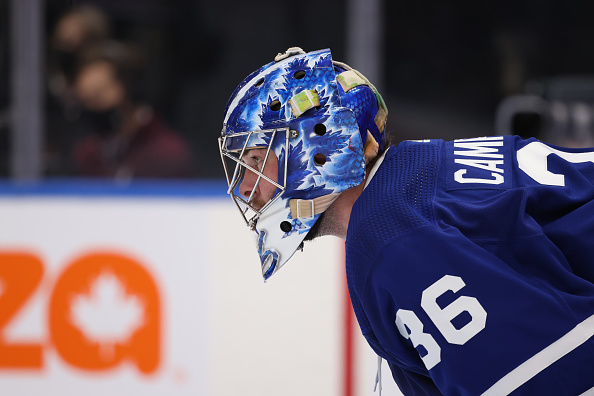 It’s Sunday and we have another edition of NHL rumours to start the week. Teams are already thinking about the future whether it’s deals or trading players. That future might get a bit of a boost in a couple of seasons with a bump in the salary cap. Today’s NHL rumours focus on the Toronto Maple Leafs and Chicago Blackhawks.

All NHL rumours come from the original source and are subject to change.

Rumour: James Mirtle of The Athletic looked at what a Jack Campbell deal may look like.

Analysis: Campbell has continued his strong play from last season into this campaign. It seems to be a sign Campbell at all costs way of thinking right now. Campbell is up there with New York Rangers goalie Igor Shesterkin for the goalie in the first half.

The 29-year-old goalie has Kurt Overhardt as his agent, who is a veteran and tough negotiator. However, Campbell wants to play in Toronto and the feeling is mutual. Mirtle said a deal will likely get done, but the early-season framework like Cal Petersen’s deal with the Los Angeles Kings won’t work. Petersen signed a three-year deal worth $5 million a season.

Mirtle used players like Jordan Binnington, Elvis Merzlikins and Linus Ullmark as comparables to Campbell. Ullmark is the low-end at $5 million while Binnington is the high-end at $6 million. Campbell could get more leverage if he helps the Leafs get post-season success. However, it’s not all doom-and-gloom for Toronto fans. General manager Kyle Dubas could sign Campbell to an extension before the off-season and they could use a longer-term to give Campbell security.

Rumour: David Pagnotta of The Fourth Period said that the Blackhawks could make Dylan Strome, Calvin de Haan and Ryan Carpenter available at the deadline. This is provided that Chicago is out of contention.

Analysis: The Blackhawks were some people’s dark horse to make noise in the Central Division and Western Conference. However, that has not gone according to plan even with Marc-Andre Fleury in the net.

Teams could use a defenceman like de Haan as a depth piece. He would be a rental as he’s in the final year of his contract. Strome and Carpenter are two forwards that could help fill out a lineup.

Rumour: Sportsnet’s Jeff Marek on Hockey Night in Canada’s 32 Thoughts said that the salary cap may take a good-sized jump in 2024-25.

Analysis: Hockey Related Revenue has gone up thanks to the Seattle Kraken coming into the league and the new ESPN deal in the U.S. It will still take a couple of seasons to see the big leap. This is because of escrow-related debt the players have to pay back to the owners. However, that should be taken care of by the end of the 2023-24 season.

NHL Commissioner Gary Bettman confirmed that the salary cap will go up by $1 million next season to $82.5 million. This might not give too much comfort to teams against the cap at the moment. However, the jump in the 2024-25 season will help out teams like the Maple Leafs and the Vancouver Canucks.

Auston Matthews will have his big deal come up for the Leafs and Elias Pettersson‘s contract also expires. Them and other free agents could see a big payday coming up in a few seasons. The cap had gone up to $4.5 million before the 2018-19 season, but the pandemic had pretty much frozen salaries.

Next post There’s a critical intersection between marketing and sales