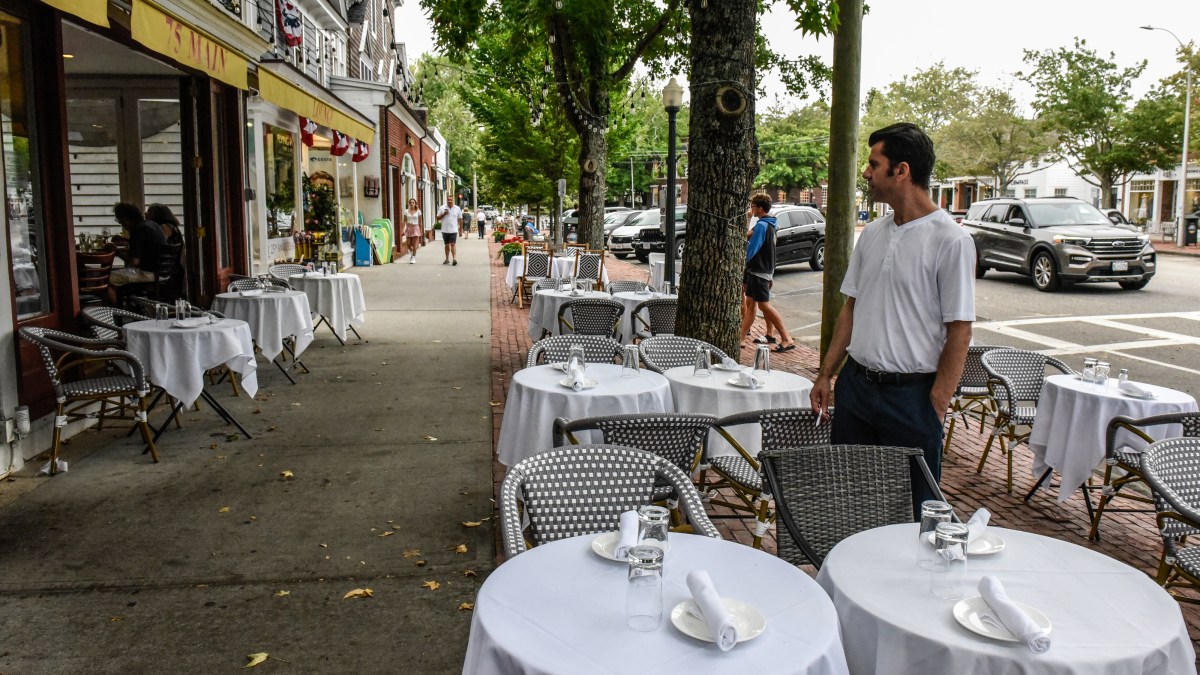 In summer 2020, I visited the Midtown East neighborhood of Manhattan — home to many office buildings, including Marketplace’s New York bureau — to see how lunch spots were faring through shutdowns.

I returned last week, after more than a year. It’s still frozen in time.

When I got to our floor, I walked past containers of disinfecting wipes and rolls of holiday wrapping paper from 2019 on the way to my desk. I opened up one of the drawers and found a card that one of our former interns wrote me, and a bunch of stickers with cats on them — I couldn’t remember where I got them.

Once I got downstairs, I headed across the street to MacarOn Café, which used to sell sandwiches, tea and macarons.

When I came here last summer, there was a display in the window from Valentine’s Day, with a giant heart made out of macarons. Now, the window is covered in a plastic tarp. The inside is gutted, with plywood on the floor and “Caution” tape hanging from the ceiling.

Down the street at The Comfort Diner, co-owner Tarek Soliman has been trying to tough it out. “We never thought it’s gonna stay like two years, the pandemic,” Soliman said.

Last year, he didn’t think the business would make it. He had so few customers that he went to his landlord in the summer and said he couldn’t do it anymore.

Forget about making a profit. One thing that’s kept him going? He wants to work, he doesn’t want to stay home.

It’s not all bleak. I walked by a chain restaurant and saw people who had to be office workers lined up to order lunch in their button-downs and slacks.

Paulina Lis, general manager at an Irish pub, The Perfect Pint East, told me that business has been picking up and it feels good. “People need to be together, you know? People are not meant to be alone,” she said. “Once we’re alone, we just start getting crazy.”

Down the street, there’s a coffee shop called Little Collins, which opened in December 2020 and serves things like espresso, cold brew and sandwiches.

“Each week, aside from maybe, like, a couple of holiday weeks, it’s been picking up,” said co-owner Nic Curnow. But even with that sales increase and a federal pandemic loan, the business has debts to pay. “You know, rent’s backdated. We won’t be in the green, I don’t think, for a wee while yet.”

That’s just the reality in this neighborhood right now. Things are getting better, but they’re still far from normal.

It’s one of those in-between times. Nobody expected to be here, and nobody knows what’s on the other side.

What’s happened to the lunch places in office neighborhoods?